I’ve had the opportunity to meet and interview a lot high-profile personalities in my career—pro athletes, actors, wrestlers, bodybuilding champs—and one thing I’m now certain of is this: Being famous does not necessarily make one interesting.

How many times have you ever picked up a magazine with some mega-famous superstar actor or athlete on the cover, then opened up to a gorgeous spread of amazing photos of said superstar, only to read a story in which you learn absolutely nothing about that person? This has become the norm for cover story writing, and it depresses the hell out of me. It’s partly the fault of the writers and editors who put these stories together, but I’m not here to say I’m better than any of them because when a subject is truly drop-dead uninteresting, no amount of clever writing or skillful editing can save the day. I’m not good enough to take something or someone genuinely dull and make you curious. If I have any real talent, it’s the ability to recognize a good story when I see one, then get the hell out of the way and let it speak for itself. I think David Otunga, who graces the cover of the December issue of Muscle & Fitness, is that kind of story. 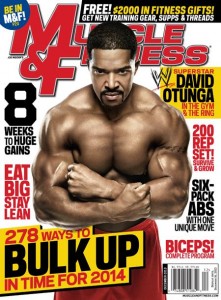 Otunga, like a lot of children of the 80s, grew up idolizing Arnold Schwarzenegger—a passion fueled by the pages of M&F—then pursued bodybuilding to the point where he built a body good enough where he could earn his living from it in the WWE. So far, par for the course; a ton of guys we feature in M&F grew up reading the mag and drawing inspiration from it. Where Otunga’s different from your average jock: He’s also a Harvard Law grad, and he credits training for this fact as well, saying it gave him the discipline to study. The guy, after all, built a squat rack in his Harvard dorm room. Now he’s not just a lawyer and WWE Superstar, but an actor and occasional commentator for Court TV. And, oh yeah, he’s engaged to the one and only Jennifer Hudson. Not too shabby.

Check out this behind-the-scenes video: