After five years at Muscle & Fitness Magazine, first as an Associate Editor, then a Senior Editor, then Deputy Editor, I’ve moved on. I’m now General Manager for a new, upcoming digital magazine from Chef Robert Irvine, with whom I co-authored the book Fit Fuel last year. Like Fit Fuel, this new digital magazine will combine Robert’s knowledge of and passion for cooking and training. May 2016 will be the debut issue, and it will be available as a free download in the last week of April. I’ll post that link here once it’s live.

For now, though, I’d like to bid farewell to M&F, a magazine I loved from the moment I picked up my first issue. When Joe Wuebben, then a Senior Editor, sent me an e-mail in November of 2004 to ask me if I’d tackle an assignment for the magazine, I popped up from my chair and sprinted around the house I was so pumped. When I got the news I’d landed a full-time gig there in late 2010, I was moved to tears I was so happy. That’s how much the magazine has meant to me over the years.

Yes, my new gig is amazing. Robert is an incredible boss and I’ve got the kind of creative freedom most men and women in my industry only dream about. Then again, it would have to be an amazing gig to pull me away from M&F, as I explain below. The following column appears in the March 2016 issue of M&F. I must say, I chose to end on a handsome-looking cover—Henry Cavill and Ben Affleck in costume for Batman V Superman: Dawn of Justice. Just take a look: 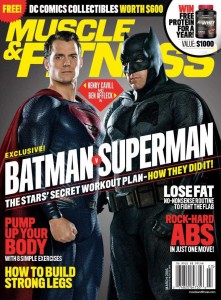 And here’s the column, unedited. The final version was trimmed a bit for space.

Our Deputy Editor says so long for now.

The night before Super Bowl XLVI, Tom Coughlin addressed his team in its final meeting before the big game. There’s video of the speech online, and, Giants fan or not, I encourage you to look it up, because the end of it will surprise you. It finishes not by placing all of the focus on winning, and it contained none of the intense fire for which Coughlin was known. Citing John Wooden, Coughlin said the greatest thing a teammate or a coach can do is love his team.

“I stand before you tonight and I’m man enough to say that I love each and every one of you,” Coughlin said.

I marveled at the speech when I first heard it four years ago, but only now do I fully understand it.

After five years at Muscle & Fitness I’m heading down the road. This issue is my last as a full-time staffer. I’m off to work on a new project with long-time M&F contributor Robert Irvine. As excited as I am, it’s bittersweet because I’m leaving a job—and people—I truly love.

To clarify, I’ve always been fortunate enough to love what I do. I loved being a golf caddy, a personal trainer, and a sports writer for a small daily paper. But what’s different about leaving M&F, and why I understand the Coughlin speech so well now, is that it’s not enough to love what you do, but who you do that work with.

I’m thinking now of some of the great things I got to do while I was here: Interview The Rock, have dinner with Arnold Schwarzenegger, train with Steve Weatherford, and work on regular columns with Irvine, Mike O’Hearn, and Frank Zane. I even interviewed Coughlin. That’s really just the tip of the iceberg. In five years I’ve had enough incredible experiences to last a lifetime. And yet, all those experiences would have mattered a whole lot less if I wasn’t just as excited about who I was sharing those experiences with.

I’m not going to name everyone on the masthead right now. It would take too long and there are plenty of people not listed there who help make M&F what it is. But you should know that like most businesses, M&F takes its cues from the top. To that end, our editor-in-chief Shawn Perine isn’t a man who sees M&F as just a business or a brand. He is the custodian of Joe Weider’s flame, which was lit over 75 years ago and continues to burn bright today because of all the people who work at M&F believe in his message.

Shawn charges everyone on staff with being keepers of that flame alongside him in all of the work that we do. Yes, you need to get the big story, sell a lot of magazines, and get a lot of people to visit the site. And you could probably do all of that without loving who you work with or even what you’re doing. A lot of consulting firms get big bucks to look at all businesses as a simple math problem that needs to be solved. Hey, that works. But I’ve also learned that the problem solves itself if you’re putting in more than just the necessary hours—if you’re doing work that’s so close to you with such incredible people that the end product cannot help but come from a pure place. People notice that. It’s what made M&F my favorite magazine long before I ever worked here. And if there’s a silver lining for me as I walk out the door, it’s that I get to once again be just a fan.

And this fan is man enough to tell the whole world that he loves this magazine and everyone who works here. Thank you to M&F, and the readers who are our lifeblood and make all this possible, for five of the best years of my life.