The Motivational Power of Arnold

The story I recently shared about my old client Ganesh got a ton of positive feedback, so I thought I’d share my own transformation story today. Naturally, it all began with Arnold.
Originally published in the February 2013 issue of Muscle & Fitness. 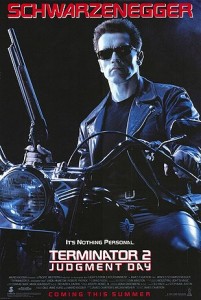 What’s the power of an image? When the image is Arnold Schwarzenegger’s, it might be limitless.

I can still remember that strange, sporadic sweat pattern on my T-shirt—four long horizontal lines intersected by a vertical one, a crosshatch formed by the folds of fat in my stomach as I lay there on my bedroom floor struggling with a set of sit-ups. I was 11 years old, desperate to lose weight, and every rep was an embarrassment. But I went on. I couldn’t let him down.

I may have been alone in that room, but not in my head. Arnold Schwarzenegger was watching the  whole sorry affair from the Terminator 2 poster above my bed, seeming to glare at me from his perch atop an aptly named Harley Fat Boy, the motorcycle he rode in the movie. When I wanted to quit, I wondered what Arnold would say if I really did. Usually, I imagined him screaming, “Come on! Do it now!”

So I kept doing the sit-ups. It took years for me to learn that sit-ups would do little to melt the blubber amassed around my waist, that fitness as a way of life—and not as a now-and-then pursuit—was the only path to the person  I wanted to be. The way I learned that lesson was by reading Muscle & Fitness, and the only reason I picked up M&F was to collect Arnold memorabilia. I kept reading M&F and eventually wasn’t so fat. I even went on to play some college football. I wasn’t very good, but even making the team would’ve been inconceivable to that sad little kid on his bedroom floor.

Having that transformational experience, and being able to clearly trace my progress back to a single image of Arnold, I grew up thinking I had some kind of unique connection with him. But as I got older I realized there was nothing at all unique about what I’d gone through. I’ve lost track of how many guys told me similar stories about how Arnold inspired them.

There will always be critics who point to Arnold’s flaws and chastise magazines like this one for placing him on too high a pedestal, saying our society is too focused on image. But sometimes, the image is what we should focus on. There’s literally no way to measure Arnold’s positive impact as the picture of strength and fitness. I’m walking proof that when you aspire to such an image, you can change your life. The larger fitness revolution, which Arnold helped start, is proof that an image can change the world.